Paco Rabanne has long been a big name in the fragrance world. However, the designer brand has really come to prominence commercially this century, thanks to the success of the initial 1 Million.

Just about everyone knows that cologne or has come across it, but what are some other top men’s fragrance options by Paco Rabanne. 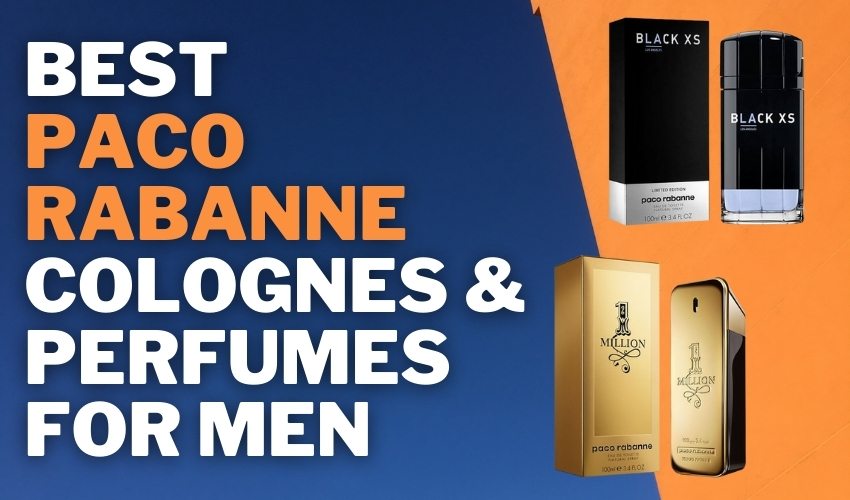 In this post, I want to share with you about the Top 10 Best Paco Rabanne Colognes and Perfumes for Men Reviews in 2022 Let’s take a closer look and take on what are the top scents from their line, finally consider choosing yourself a suitable fragrance 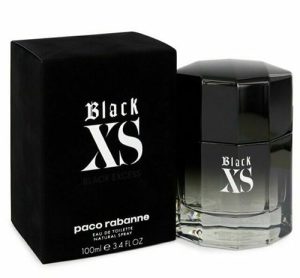 Provocation and Sex are the first words that come to mind when want to describe this aroma. Black XS by Paco Rabanne, this oriental reminiscences fragrance and woody aroma were released by the Rabanne Brand during the year 2005, being created by Rosendo Mateu and Olivier Cresp.

The intense smell that characterizes its composed of top notes based on lemon and sage; predominant notes of black cardamom, Tolu balsam, praline, and cinnamon, and base notes of black amber, patchouli, and Brazilian rosewood. It creates an exquisite fragrance after harmonizing both its acid and sweet smells.

Black XS by Paco Rabanne is directed at men with great character, who are also sensual, original, bold, and surrounded by mystery, those who aren’t subjected to the conventional but want to create their own rules. Ideal for any special occasion and the night, whose balance between the acidic and the sweet makes it perfect for day hours too.

Paco by Paco Rabanne, richness, sophistication, and power; the word that can best describe all of that words is ‘1 Million’. This perfume was created by Olivier Pescheux, Christophe Raynaud, and Michel Girard, launched in the year 2008, being one of the best-selling perfumes on the European continent. Some think the reason for this is the combination of an intense base, leather, wood, amber, and Hindi patchouli, with dominant notes of spices, cinnamon, and rose, and some fresh top notes of mint, grapefruit, and tangerine.

In addition to the mainline (Eau de toilette), it also has 5 alternative lines plus one Christmas special edition, each one being characterized by its own particular smell.

1 Million’s container like a gold ingot, meant to represent all the luxurious characteristics and prosperity associated with this fragrance. Because of this, this perfume becomes one of the best alternatives for active, elegant, and intense men as well as the ones who not only like to stand out in the crowd but also highlight seduction.

Thanks to its moderate to strong smell, it’s highly recommended to use this fragrance during the night and afternoon hours, but it can be used all day without problems. 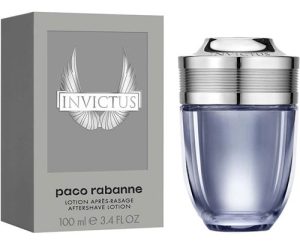 Created by Anne Flipo, Veronique Nyberg, Olivier Polge, and Dominique Ropion, and released in 2013, this fragrance belongs to the Woody – Aquatic olfactory family. Invictus possesses some base notes of, oakmoss, Gaiac wood, patchouli, and gray amber that combines perfectly with the predominant smells of jasmine and laurel, as well as citrus and marine soft notes.

Its container is a cup that simulates a sports competition trophy, and this is because ‘Invictus’ is an aroma that manages to describe competitive, vibrant, vigorous, persevering, strong, powerful typologies, it describes ‘mighty’ men like the legendary Spartan warriors, but that also manages to adapt to the needs of daily life, have fun and relax.

Because of these characteristics, it becomes an ideal choice for young men and you should use it for day hours, it appropriate for it. 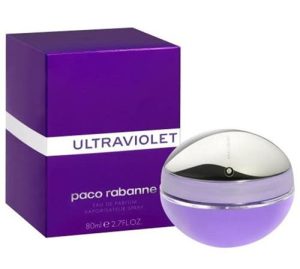 ‘Ultraviolet’ is a fragrance characterized by the fusion of oriental and woody aromas with the freshness of the mint. Created by Jacques Cavallier and released during the year 2001, it manages to mix mint and amber on a base of vanilla and oak that also has strong spicy notes of pepper and vetiver.

What makes this perfume special, as well as the person who finds this fragrance tempting, is its combination between its not-so-strong sweet notes and the freshness of nature. It was designed with active men and uncomplicated in mind, and its aroma gives off the impression of fondness for nature, simplicity, and practicality. Perfect for daily use, as well as during daytime hours. 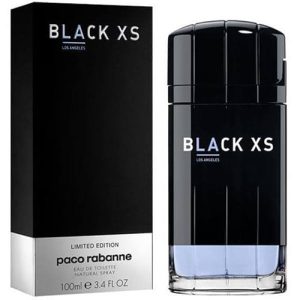 The next product in the Top 10 Best Paco Rabanne Colognes and Perfumes for Men Reviews is Black XS Los Angeles. This fragrance was created by Olivier Cresp for the Rabanne house and was released in 2016. It belongs to the Oriental-Woody olfactory family with persistent fruit notes and its characteristic smell is based on notes like oakmoss, wood, and vanilla, in addition to the richness of apple, pineapple, cinnamon, and lily as well as some outstanding orange, lemon, and clary.

‘Black XS Los Angeles’ is a pretty liberal version of the legendary ‘XS’ and is directed towards the minority people. Its use describes carefree and romantic personalities, but also bold, intense, and daring at the same time, as well as having a little bit of mystery. It’s the ideal perfume for young men that live their life to their fullest.

Thanks to its intense combination between citrus and sweet, this fragrance becomes a perfect alternative for both night and day, as well for special occasions. 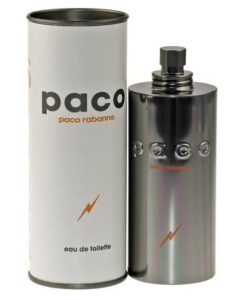 Released in 1998 and Created by Rosendo Mateu, it belongs to the Floral-Citrus olfactory family. Paco Energy by Paco Rabanne possesses very aromatic top notes with citrus main chords, traits of both the lemon and the tangerine. Its base notes are a mixture of musk, amber, oakmoss, and cedar that give it a certain depth without being too strong. Finally, floral notes are dominant, using lily and jasmine of the valley, as well as adding some sweetness and smoothness.

As usual, coming from Rabanne, its aroma suggests duality, the fusion of elements that seem distant at first glance, but that also surely want to reflect the human versatility and complexity.

After reaching 3 different olfactory dimensions, and without looking overloaded, the choosing of ‘Energy’ evokes energetic, modern, and very active men, being a vibrant and fresh fragrance. To be honest, it’s more directed to the youth, but It’s the ideal perfume for daily use and for adults in a wide age range. 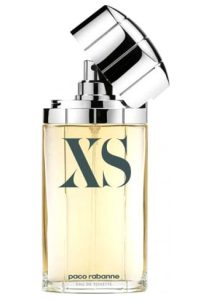 Classic masculinity is the main trait of this perfume without a doubt. Created by Gerard Anthony and Rosendo Mateu, and released during the year 1994, XS by Paco Rabanne mixes pretty well sweet and the freshness of spicy notes.

The elements responsible for its wonderful smell are top notes like mint, bergamot, rosemary, tangerine, tarragon, lime, and lemon; along with some dominant notes like coriander, sage, Virginian juniper, Brazilian rosewood, and some base notes of sandalwood, musk, vanilla, amber, patchouli, oakmoss, and cedar.

Directed at sober and virile but not overly formal gentlemen, XS by Paco Rabanne goes well with a strong, conservative, and elegant personality. It’s recommended for adults of a wide range of ages, making it appropriate for any moment of the day. 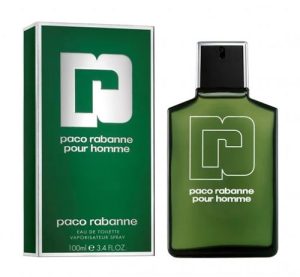 This aromatic perfume belonging to the Fougère aromatic olfactory family was inspired by those men that are sensible and bold. ‘Paco Rabanne Pour Homme’ was released in 1973 under the tutelage of its creator Jean Martel, and even today it enjoys good popularity and an expansion on the market.

Paco Rabanne Pour Homme‘s top notes are clary, rosemary, and Brazilian rosewood, combined with base notes of amber, honey, musk, and oakmoss, also adding the strong presence of the lavender, Tonka bean, and geranium. All these ingredients manage to give aromatic traits to this fragrance, traits that tend to intensity, freshness, and of course, so sweetness. Likewise, the clean lines of its container, along with its suggested seduction, intense green color, and elegance that distinguishes virile gentlemen.

The use of this aroma gives the idea of sure of himself, a classic, of great character, vigorous, contemplative, and very masculine personality. It’s the ideal perfume for men of a wide age range that get along really well in corporate environments, and its versatility allows it to be used both during night and day. 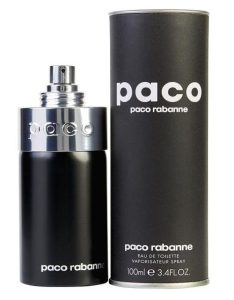 This perfume, created by Rosendo Mateu and released in 1995, belongs to the Citrus-Aromatic olfactory family. Paco by Paco Rabanne‘s fragrance is composed of base notes that combine the Tonka bean, the musk, the sandalwood, and Virginian cedar on jasmine, lavender, tea, and cyclamen aromas, along with top notes of tangerine, coriander, pine, and Amalfi Coast lemon.

‘Paco’ is meant to celebrate both elegance and the everyday feeling given by the simplicity of daily life. However, that doesn’t stop it from looking for the distinction of the exclusiveness and unique personalities that all the creations of this designer offer.

It wants to be used by alternative, active, cheerful, extroverted, and relaxed men that like to enjoy the freshness and smoothness, being a clean aroma and ideal for daily use. 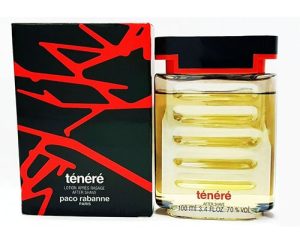 By using this perfume, something is certain: You’ll stand out a lot. Created by Rosendo Mateu and Pierre Wargnye, and Tenere by Paco Rabanne is released in 1988, this fragrance has a robust consistency that brings to mind both the intensity and the strength, is perfect for special occasions and the night hours.

This aromatic fragrance is built on a base of amber, leather, patchouli, vetiver musk, and cedar, which gives it both depth and strength. Its aromatic core is composed of honey, carnation, southernwood, cinnamon, lily root, tarragon, jasmine, lily of the valley, rose and anise, and its top notes are adorned with lavender, rosemary, green aromas, cassia, bergamot, grapefruit, and lemon.

By choosing ‘Tenere’, people will think that you have an attractive, free, determined, seductive, and confident personality, as well as the idea that you have no fear to be the center of attention. It’s directed to a wide range of men, but it’s more oriented towards contemporary adults given the strength and security that it gives.

This website is a participant in the Amazon Services LLC Associates Program, an affiliate advertising program designed to provide a means for sites to earn advertising fees by advertising and linking to Amazon.com

We use cookies to ensure that we give you the best experience on our website. If you continue to use this site we will assume that you are happy with it.Ok